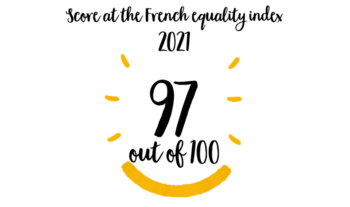 This year, Nataïs scored 97 points out of 100 in the gender equality index.

For 2021, Nataïs is continuing its commitment to equality and diversity.

It is with a long-term perspective that we want to continue to work together to increase gender equality in all our teams.

Joining the men and women of Nataïs means joining a family business in which diversity is a common and shared value.

"I have always taken gender equality for granted at Nataïs, and I am proud that our 2021 score reflects this so clearly. Diversity at all levels has been at the heart of the company's DNA and values since it was founded in 1994. It is a source of richness at the service of creativity and is essential to our innovation process."

By working together, we can unleash our Talent

Nataïs, beyond the gender equality index

48% of managers are women

Our score in summary

For companies with fewer than 250 employees, the gender equality index corresponds to the sum of the results obtained by the company for each of the 4 indicators summarized in the following table:

Our score in detail

The improvement in our score is primarily due to the positive evolution of two of the indicators used in the calculation. On the one hand, we have reduced the gender pay gap from 4.32% to 2.4%, which has enabled us to improve our score on indicator No. 1. On the other hand, this year 2021 was marked by the achievement of parity for indicator no. 4, since the 10 highest salaries in the company were received by 5 men and 5 women.

1. Pay gap between women and men, for the same job and at equivalent age (as a %)

The methodology foresees the calculation of this indicator according to predefined social and professional categories and age groups. This is followed by the definition of population groups that can only be valid if they are composed of at least 3 women and 3 men.

For the year 2021, the configuration of the populations allowed us to count an additional group and thus to obtain a score of 37 points out of 40.

On the other hand, the calculation methodology does not take into account the competence management approach. The absence of this concept, which is essential at Nataïs, makes it more difficult to read the 2.4% difference.

2. Difference in individual pay increases between women and men (as % points or in terms of number of employees)

This result is explained by the fact that the number of women receiving a raise in 2021 is greater than that of men.

The administration therefore considers that Nataïs has implemented corrective measures, which enables us to obtain the maximum score of 35 points out of 35 for this indicator.

3. Percentage of female employees who benefited from an increase upon return from maternity leave (as a %)

100% of our female employees received a raise before, during or after returning from maternity leave. This means that we achieve the maximum score of 15 points out of 15 for this indicator.

4. Parity amongst the 10 employees who received the highest remuneration

Accordingly, all companies with more than 50 employees publish in the public domain and annually their professional gender equality index so that any potential discrepancies can be evaluated, and corrective measures put in place.